In 1972 two members of Western Districts operated their amateur radio stations, V.K.4DE and V.K.VBT, passing on vital information during the emergencies caused by Cyclones 'ELSIE' and 'DAISY'.

From the March 1969 Australian Lion:

Brisbane-Western Districts club (201K) achieved a first in international relations recently when an 'agreement of alliance' was formally signed by President Peter Greer in Brisbane, and by the President of the Taipei Lions club (District 300) in China. By the agreement, the two clubs are united in a bond of friendship, or to use the Chinese term, a 'sisterhood'.

The agreement was signed at ceremonies held in Brisbane and Taipei.

In Taipei, Western Districts Lions club was represented by Mr R. Cottrill, Secretary to the Australian Embassy, and 400 guests witnessed the ceremony.

A Certificate of 'alliance', compiled by Lion Stan Morrison, International Relations Chairman of the local club, was handed to Mr Chen to be forwarded to the Taipei club's president, Lion Yen Kuo-Sung.

In return, Taipei Lions club forwarded a specially designed bannerette together with their certificate of 'alliance'. The Taipei certificate is written on silk in English and Chinese characters and is now a prized possession of Western Districts Lions.

An indication of the high esteem in which Lions are held in that part of the world may be gauged by the fact that the agreement between the two clubs was featured in the China Post, the largest English language newspaper in the Orient. The story occupied the entire front page together with further space inside the newspaper. 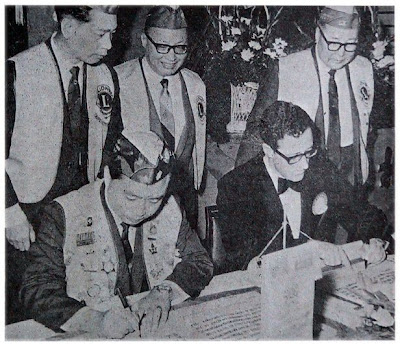 The alliance was the result of a discussion between the Western Suburbs members and Mr Chen at the club's previous installation night when Mr Chen proposed the toast to Lions International. At his suggestion, the club entered into correspondence with Taipei Lions club and the alliance was the happy outcome.

Lions are people who get involved in humanitarian efforts locally, nationally, and internationally.

People like you can find community service and volunteer opportunities in Lions through: